Researchers have identified a mutation in a gene that confers several distinct traits to East Asians, including thicker hair.

The traits — thicker hair shafts, more sweat glands, characteristically identified teeth and smaller breasts — are the result of a gene mutation that occurred about 35,000 years ago, the researchers have concluded.
The discovery explains a crucial juncture in the evolution of East Asians. But the method can also be applied to some 400 other sites on the human genome. The DNA changes at these sites, researchers believe, mark the turning points in recent human evolution as the populations on each continent diverged from one another.
The first of those sites to be studied contains the gene known as EDAR. Africans and Europeans carry the standard version of the gene, but in most East Asians, one of the DNA units has mutated.
Seeking to understand if the gene was the cause of thicker hair in East Asians with the variant gene, a team of researchers led by Yana G. Kamberov and Pardis C. Sabeti at the Broad Institute in Cambridge, Mass., decided to test the gene in mice, where its effects could be more easily explored.
Mice already have EDAR, an ancient mammalian gene that plays a leading role in the embryo in shaping hair, skin and teeth. The Broad team engineered a strain of mice whose EDAR gene had the same DNA change as the East Asian version of EDAR.
When the mice grew up, the researchers found they did indeed have thicker hair shafts, confirming that the changed gene was the cause of East Asians’ thicker hair. But the gene had several other effects, they report in Thursday’s issue of the journal Cell.
One was that the mice, to the researchers’ surprise, had extra sweat glands. A Chinese member of the team, Sijia Wang, then tested people in China and discovered that they, too, had more numerous sweat glands, evidently another effect of the gene.
Another surprise was that the engineered mice had less breast tissue, meaning that EDAR could be the reason that East Asian women have generally smaller breasts.
East Asians have distinctively shaped teeth for which their version of EDAR is probably responsible. But the mice were less helpful on this point; their teeth are so different from humans’ that the researchers could not see any specific change.
The finding that the gene has so many effects raises the question of which one was the dominant trigger for natural selection.
Dr. Sabeti said the extra sweat glands could have been the feature favored by natural selection, with all the other effects being dragged along in its train.
“We’re the only mammals to have changed their entire hair pattern. So the changes in teeth, hair and breasts — it’s very possible they are the passengers and thermoregulation is the key,” she said, referring to the role of sweat glands in cooling the body.
East Asians are sometimes assumed to have evolved in a cold environment because of their narrow nostrils, which conserve heat, and the extra eyelid fat that insulates the eye. But the Broad team calculates that the EDAR variant arose about 35,000 years ago in central China and that the region was then quite warm and humid. Extra sweat glands would have been advantageous to the hunter-gatherers who lived at that time.
But Joshua Akey, a geneticist at the University of Washington in Seattle, said he thought the more likely cause of the gene’s spread among East Asians was sexual selection. Thick hair and small breasts are visible sexual signals which, if preferred by men, could quickly become more common as the carriers had more children. The genes underlying conspicuous traits, like blue eyes and blond hair in Europeans, have very strong signals of selection, Dr. Akey said, and the sexually visible effects of EDAR are likely to have been stronger drivers of natural selection than sweat glands.
Yet a third view is held by Dr. Kamberov, who believes that each of the effects of the EDAR variant may have been favored by natural selection at a different time. A series of selections on different traits thus made the variant version so common among East Asians. About 93 percent of Han Chinese carry the variant, as do about 70 percent of people in Japan and Thailand, and 60 to 90 percent of American Indians, a population descended from East Asians.
The Broad team is studying EDAR as part of a larger plan to identify all the genetic variants responsible for recent human evolution. Many researchers, including Dr. Sabeti, have devised ways of scanning the human genome to detect the fingerprints of natural selection. But these scans have typically identified large chunks of the genome that contain many genes. There is often no way to tell which gene was the target of natural selection.
A team led by Dr. Sabeti and Sharon R. Grossman of the Broad Institute has now refined the usual scanning methods and identified 412 sites on the genome that have been under selection. Each site is small enough that it contains at most a single gene.
Each race has a different set of selected regions, reflecting the fact that the human population had dispersed from its African homeland and faced different challenges that led to genetic adaptation on each continent. About 140 of the sites affected by natural selection are in Europeans, 140 in East Asians and 132 in Africans, the authors report in another article published Thursday in Cell.
Inserting some of the other selected genes into mice might help explain why they were favored, and point to critical turning points in recent human evolution, Dr. Sabeti said.
In the case of EDAR, putting the gene into mice has only magnified the mystery of why it was selected. But the researchers are not discouraged. “A reflection of good science is that a step forward opens up a lot more questions,” Dr. Akey said.

A version of this article appeared in print on February 15, 2013, on page A18 of the New York edition with the headline: East Asian Physical Traits Linked to 35,000-Year-Old Mutation.

Only a bird » Pharyngula

Only a bird » Pharyngula:


Another feathered dinosaur has been found in China, prompting Ken Ham to dig in his heels and issue denials.

Yet another supposed “feathered dinosaur” fossil has come to light, again in China. (Dr. Elizabeth Mitchell, AiG–U.S., reported on another Chinese fossil of a supposed feathered dinosaur in April 2012) Now, one headline described the fossil as “almost birdlike,” and the authors of the report in Nature Communications note many features the fossil shares with living birds, particularly those that live on the ground. In fact, Dr. Elizabeth Mitchell and Dr. David Menton (AiG–U.S.) both examined the photos of the fossil and the criteria the authors used in classifying the fossil as a dinosaur. They agreed that it is a bird, not a feathered dinosaur.

Oh, really? It’s just a bird? Take a look at this image of Eosinopteryx, and you tell me. 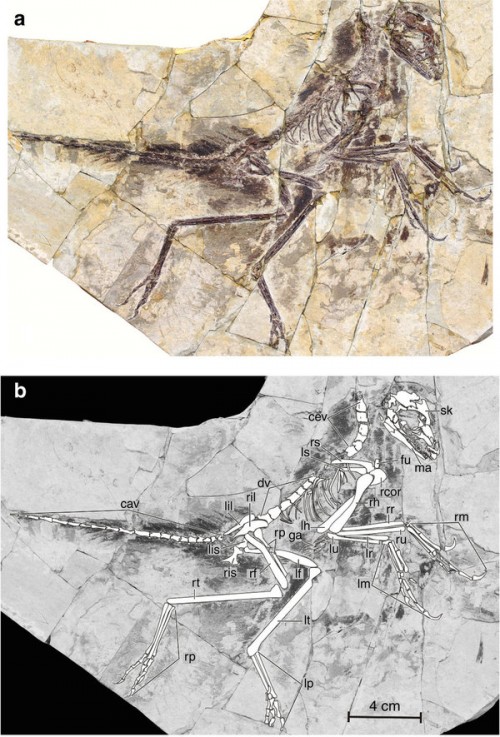 Notice a few things about this animal: it’s got teeth. The forelimbs have clawed digits. It has a long bony tail. It lacks the bony keel that anchors breast muscles in modern birds.
The only thing that might cause you to question its dinosaur nature (and it’s a criterion that’s proving more and more inappropriate) is that lovely gray fringe of feather impressions that surround the whole fossil. And look at those forelimbs! It looks like it has stubby wings. It does not, however, have the skeletal and muscular structure to allow for extended flapping flight, and the wings are way too short for it to have been an adequate flyer.
But Mitchell and Menton and Ham looked at that and said ‘ALL BIRD’. They’re idiots.
Ham goes on: there are no transitional forms, he squeaks, there can be no transitional forms, transitional forms don’t exist…all while looking at a winged, feathered reptile with teeth and claws and a bony tail.

The fossil record doesn’t reveal any kind of dinosaur-to-bird evolution—and it certainly does not show a molecules-to-man evolution. We have no proof of transitional forms, and we won’t. God’s Word says clearly that He created animals and plants according to their kinds (Genesis 1). Through genetic loss and other factors, new species have emerged over time—but birds are still birds and apes are still apes. Nothing in the history of biology has legitimately shown that dinosaurs could develop the genetic information to evolve into birds.

Pitiful. Pathetic. I’d like to see a creationist sit down in front of me with that illustration and try to defend the claim that it’s only a bird.
Godefroit P, Demuynck H, Dyke G, Hu D, Escuillie F, Claeys P (2013) Reduced plumage and flight ability of a new Jurassic paravian theropod from China. Nature Communications 4, 1394. doi: 10.1038/ncomms2389